The veiled chameleon is a species of chameleon native to the Arabian Peninsula in Yemen and Saudi Arabia. Other common names include cone-head chameleon and Yemen chameleon.

Veiled Chameleons are a large, colorful species of chameleon, which are very easy to recognize by the large casque or helmet seen on the male veiled chameleon on the top of the head. With male veiled reaching up to 2 feet including tail length, and females reaching a total length of approximately 18 inches, veileds are some of the larger chameleon species seen in captivity and some of the most outstandingly colorful chameleons.  Adult veiled chameleons for sale exhibit coloration that includes a variety of shades of green, orange, yellow, blue, black and even brown with a combination of strips and spotted patterns.  As far as handling your cham goes, we recommend a panther chameleon over the veiled.

Veiled Chameleons can be sexed from the day they hatch. Interestingly, baby male Veiled Chameleons for sale are born with a small nub on their back foot called a tarsal spur that females lack. Also, veiled chameleon males of this species tend to exhibit more colors as well as a larger casque then female veiled chameleons and on average live 6-8 years. Females of this species typically show less vibrant colors.  Also, females live on average 4-6 years because even when not bred.  Because of egg laying they will produce infertile clutches of eggs, which take a lot of energy.

The Veiled chameleon for sale is one of the cheaper priced chameleons due to their large numbers resulting from decades of captive breeding.  Also, Veiled chameleons are hardy, striking-looking lizards with a tall casques (helmet-like structures) on the tops of their heads. Keep in mind that casque is present in both males and females, and aids in steering water that falls onto their heads into their mouths. Lastly, Veiled chameleons have bodies that are banded in shades of green, yellow and brown which adjust to varying shades.

Lifespan: Approximately 6 to 8 years in captivity 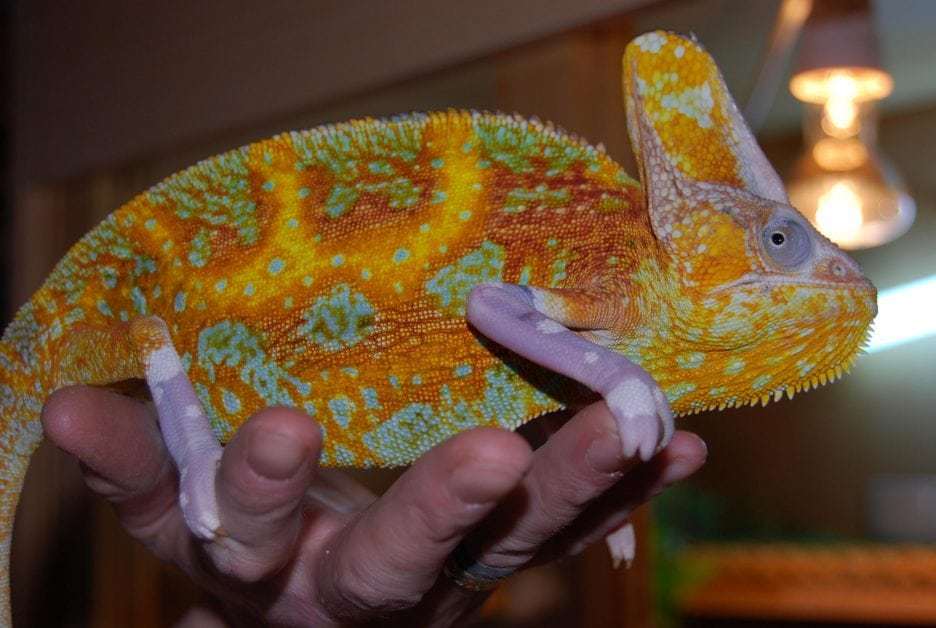 Veiled Chameleons should never be kept in a glass terrarium or aquarium. Both baby and adult chameleons for sale need the ventilation that a mesh enclosure provides. It helps to use a fine metal or fiberglass mesh is not recommended but PVC coated hardware cloth can also work.

Vertical space is most important and a cage size of 36 inches by 24 inches by 36 to 48 inches tall should be used (the bigger and taller the better). Because veiled chameleons and panther chameleons for sale like to climb high up off the ground to the height is of utmost importance. Most importantly, if possible, an outdoor cage can be used when the weather is warm enough, as long as overheating is prevented.

Cleanliness in the cage is vital to preventing bacterial or mold growth. Using paper towels or newspaper to line the cage makes cleaning easy and a reptile dirt mixture can be placed on top. Do not use wood chips or any other substrate.  Because this type of substrate could be accidentally ingested and cause blockages.

Provide lots of sturdy non-toxic plants and branches. Ficus trees have often been used in chameleon housing but they require some caution as the sap can be irritating.

Other plants you could try include pothos, hibiscus, and dracaena. Artificial plants and artificial vines may also be added. A varying selection of branches should be provided, making sure there are secure perches at different levels and temperatures within the cage for your chameleon to climb on. 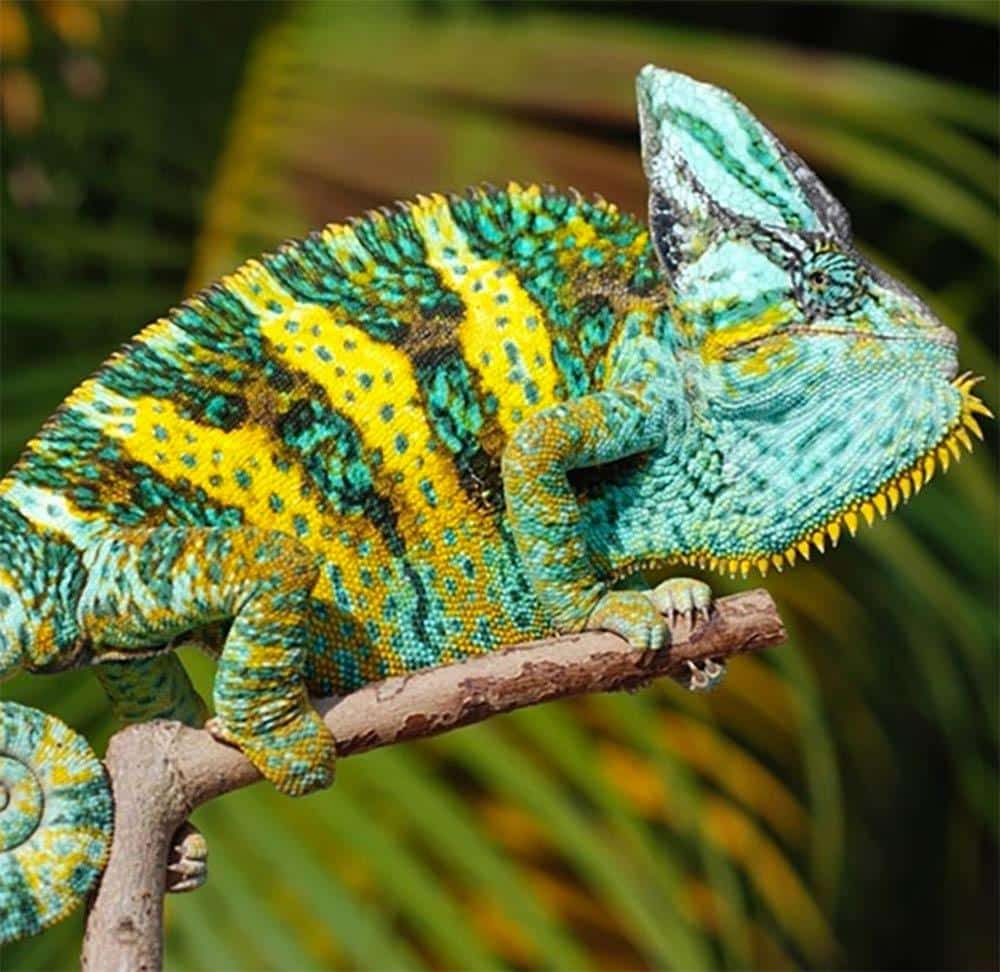 Veiled chameleons are territorial and aggressive to other chameleons so they should always be housed individually. While they are usually quite docile towards people, regular handling tends to be stressful for them. They are pets better suited to being watched rather than handled.

These chameleons are not good pets for small children, or for novice lizard owners.

Veiled chameleons need a moderate humidity level (around 55 percent).  AT CB Reptile we recommend using a chameleon misting system, like the Mist King.  Alternatively, you can spray the plants down for 90 seconds 5-6 times a day with a pressure mister.  Misting the plants twice daily will help with humidity levels and a drip or misting system is also recommended. Chameleons rarely drink from a water bowl but they will lap up droplets of water off plants so the misting/drip system also serves as a water source. Position a drip system so the water droplets cascade over the plants in the enclosure. Invest in a hygrometer to measure the humidity.

For veiled chameleons, a daytime temperature of about 74 to 82 degrees Fahrenheit should be provided along with a basking spot at 85 to 95 degrees. As long as your home doesn’t drop below 66 to 72 degrees at night, heating at night isn’t necessary.

Heating is best accomplished by using a basking or incandescent light in a reflector or a ceramic heat element to achieve the basking spot temperature, all of which should be placed outside of the cage to prevent burns.

All chameleons need a full spectrum (UVA/UVB)ultraviolet light source. Keeping UV light on for 11 to 12 hours daily, and follow the manufacturer’s recommendation for the distance that the bulb should be located in the cage to carefully not prevent burns.  Be sure to measure the distance between the chameleon UV lamp and where your chameleon can climb (usually 5 to 14 inches).

Remember these bulbs need to be replaced every six months. Chameleons also benefit from spending time outdoors in natural sunlight when the temperatures are warm enough (but beware of overheating so make sure shade is always available).

Veiled chameleons for sale are mostly insectivores so they should be fed a variety of insects every other day. Crickets are usually the mainstay of the diet but locusts, roaches, butterworms (good for calcium), silkworms, flies, and grasshoppers can be fed, as well as mealworms, superworms, and waxworms (in limited quantities as they are high in fat).

Be wary of wild-caught insects due to possible exposure to pesticides and always avoid feeding a lizard ants or fireflies. All insects should be gut loaded. Many veiled chameleons will also eat a bit of plant matter so it is vital that only non-toxic plants are used in your chameleon’s enclosure.

You can offer small amounts of vegetables and fruits such as dandelion leaves, collard greens, kale, diced zucchini, butternut squash, red pepper, blueberries, and thin slices of apple or pear. Monitor your chameleon and adjust feeding amounts as needed. If any insects are left uneaten or your chameleon is too full-bodied you may want to reduce the amount you’re feeding them. Never leave live prey in the cage for extended periods of time as insects may attack your chameleon, which can lead to infection.

It is extremely important to always dust insects with a calcium/vitamin D3 supplement two to three times a week.  We use Vionate and Reptical in a 1:1 ratio.  Really, any good multi-vitamin and mineral supplement can be added once to twice a week. Also, some experts recommend choosing a supplement that does not contain vitamin A, use beta-carotene instead.

Lastly, Like many pet lizards, veiled chameleons are prone to respiratory infections if not housed correctly.  Also, they are prone to stress-related ailments. Lastly, be sure to use supplements to prevent Calcium and vitamin A deficiency.  This can result from poor diet, are is also fairly common. 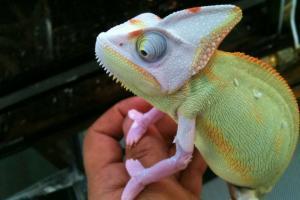 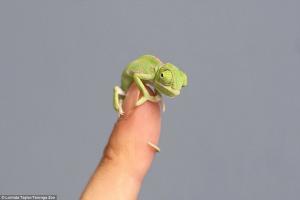