With a Biologist ON SITE, all of our florida box turtles for sale online come with our live arrival and full 7 day health guarantee.  If you purchase a complete turtle setup kit from our shop, your turtle will automatically come with a 30 day health guarantee.  Our florida box turtles for sale are ready to ship to your door via FedEx in heated or cooled containers and will arrive the morning after shipment.  Typically they leave here around 7pm and are on your doorstep the next morning between 8-10am.

Florida box turtles are found mainly in Florida and the Florida keys.  FBT Can be found as north as Georgia.  Keeping a Florida box turtle that is captive bred is legal in most states besides Florida.

Florida box turtles have highly domed shells that are 4-6″ in length.  Males have a concave plastron, where females are convex, to hold eggs.

The Florida box turtle is similar in color to the Western Ornate turtle but has thinner and more numerous yellow markings. The background of the shell is black. It has thick yellow stripes on each side of its head. The back of its shell flares out slightly.

The Florida box turtle has very sharp claws and is a good climber. They normally have four toes on their back feet.

A male Florida box turtle for sale usually has bright red or orange eyes and a concave plastron. The male’s tail is usually longer and thicker than the females. The male also has a hooked claw on its back feet.  Females have darker red or brownish eyes. The female’s plastron is much flatter than males in order to carry eggs when gravid.

What does a Florida Box Turtle Eat?

The Florida box turtle for sale eats a large variety of insects such as crickets, flies, slugs, earthworms, beetles, and even spiders. Insects make up about half of the box turtles diet.  Floridas in the wild also are known to eat berries, moss, and mushrooms.

How old can a Florida Box Turtle get?

A Florida box turtle can be kept in an outdoor or indoor enclosure. Outside is best becomes it usually gives the turtle more room to roam and a more stimulating environment. Box turtle habitats should receive some direct sunlight but also have plenty of plants for shade and hiding areas. High humidity is required for Florida’s unlike some other box turtles so you’ll need to spray once a day during the warmest months or use a misting system.

Because the Florida box turtle has extremely sharp claws it is an excellent climber. You need to remember this when you build its enclosure and be sure the sides are not made of some type of fencing that will be easy for your turtle to climb . Because turtles are expert diggers your enclosure needs to go under the ground 10 to 12 inches using bricks or some sort of fencing. Florida box turtles spend a lot of time in the water.  For this reason a soaking sized water fish or tub is recommended.

Before purchasing your new turtle, be sure to check out our box turtle care section!

CB Reptile has much more than just Florida box turtles for sale! 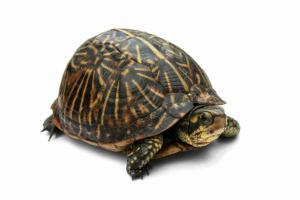 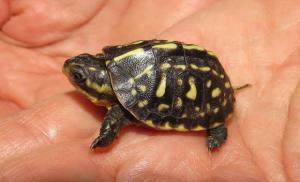